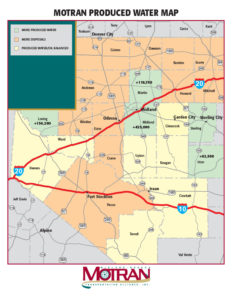 During the development of the Texas Freight Plan, MOTRAN officials noted a lack of focus on freight in the Permian Basin. Over the last year, through research and data collection, it was discovered that much of the data used in the development of the state freight plan does not incorporate the high degree of regionally generated freight that we see in the energy sector and Permian Basin.

MOTRAN began looking for ways to document local and regionally generated freight. While much of the energy sector funding has historically been directed towards short-term drilling activity, MOTRAN has always encouraged looking at the long-term transportation impacts of actual production. While so much of the emphasis on energy sector activity focuses on what it takes to produce a barrel of oil, long-time Permian insiders understand that the real impact to roads and highways is the disposal of produced/brine water that goes with it. In fact, for every barrel of oil produced, there are generally three to five barrels of produced water, and the bulk of that produced water is disposed of by trucks that move this freight from battery locations to disposal wells throughout the Permian Basin.

With the generous assistance of Railroad Commission Chairman Christi Craddick, MOTRAN worked to break down documented volumes of disposed water, converting that volume to truck trips, and daily truck miles. The conservative methodology produced astonishing results. When comparing the daily truck miles TXDOT estimates on roads and highways with the miles needed to dispose of produced water, we found a deficit of nearly half a billion miles. In other words, our area sees more truck miles from the disposal of brine water, not including any other freight activity, than TXDOT has estimated in total. Since these miles are a major factor in state funding formulas, the impact is tremendous.

“We are grateful for the opportunity these freight hearings have provided us to learn more about how TXDOT views freight in the state and to find well-documented data to make the case that this model needs to include factors to add regionally generated freight,” said MOTRAN President James Beauchamp.
“While this factor is important to us in the energy sector, it is just as important to those involved in agriculture, and those manufacturing goods to be exported abroad who are not right on the border. These are significant economic drivers, but they really are not considered in the current freight model.” MOTRAN Chairman Eric West added, “We also understand the importance of this data to formula funding by the department. Being able to correct and provide better data means more funding for our area, and not just for today, but for years to come. We have tremendous funding challenges in the Permian Basin and Midland-Odessa area. While MOTRAN has been very successful at obtaining additional funding for key projects, we also believe our efforts in this endeavor will help develop the infrastructure necessary to make our community and region a better place for the next generation.”