In 2016, MOTRAN joined with the Gulf Coast Strategic Highway Coalition to begin work on the task of re-designating the western segment of I-14 from its current path of Brady to I-10 along US 190, to San Angelo and Midland-Odessa via US 87 and SH 158.

“Congressman Conaway played a big role in helping facilitate the initial discussions,“ said MOTRAN President James Beauchamp, “His support as a committee chairman and as part of the leadership will also be critical to help get this done.”

“The Midland-Odessa route via San Angelo will dramatically increase the population served, freight usage, and will more than triple the initial traffic as opposed to the US 190 route, so we think the change just makes good sense,” added past MOTRAN Chairman Trey Crutcher.

MOTRAN and the Gulf Coast Strategic Highway Coalition have had numerous discussions and both worked with congressional and state leaders to draft language and build support for the effort. In January of 2018, Congressman Mike Conaway filed HR 4823, titled “Connecting the Rest to the West” which serves as the legislative vehicle for these changes.

Congressman Conaway stated, “This expansion through San Angelo to Midland will not only provide a safer route for travelers and an economic boon in the area, but will also directly connect the Permian Basin – one of the top oil and gas producing regions in the world – with one of the largest ports in the country. Allowing our producers to more quickly and safely move their products to market will further shore up our nation’s energy independence. In addition to the economic benefits felt in West Texas, the route will also provide our military with a clear route connecting larger military installations in Texas, including to Fort Bliss and Fort Hood, to the strategic seaports on the Gulf Coast.”

The route is also being mirrored by the development of the Permian Global Access Pipeline project. The LNG pipeline would draw from the WAHA hub, as well as a line coming from Jal, New Mexico, and terminate at the Driftwood Hub on the southwestern Louisiana coast. The Driftwood hub would also be fed by another pipeline originating in the Haynesville-Bossier play, as well as a line originating south of Alexandria, Louisiana.

Incoming MOTRAN Chairman Eric West stated, “The re-designation of this segment of I-14 to the area will be a top priority for MOTRAN. Building out this connection to so many other vital markets in Texas is vital to the energy sector, agriculture production, distribution opportunities, and to accommodate the population and workforce growth we have seen here in the Permian Basin.” 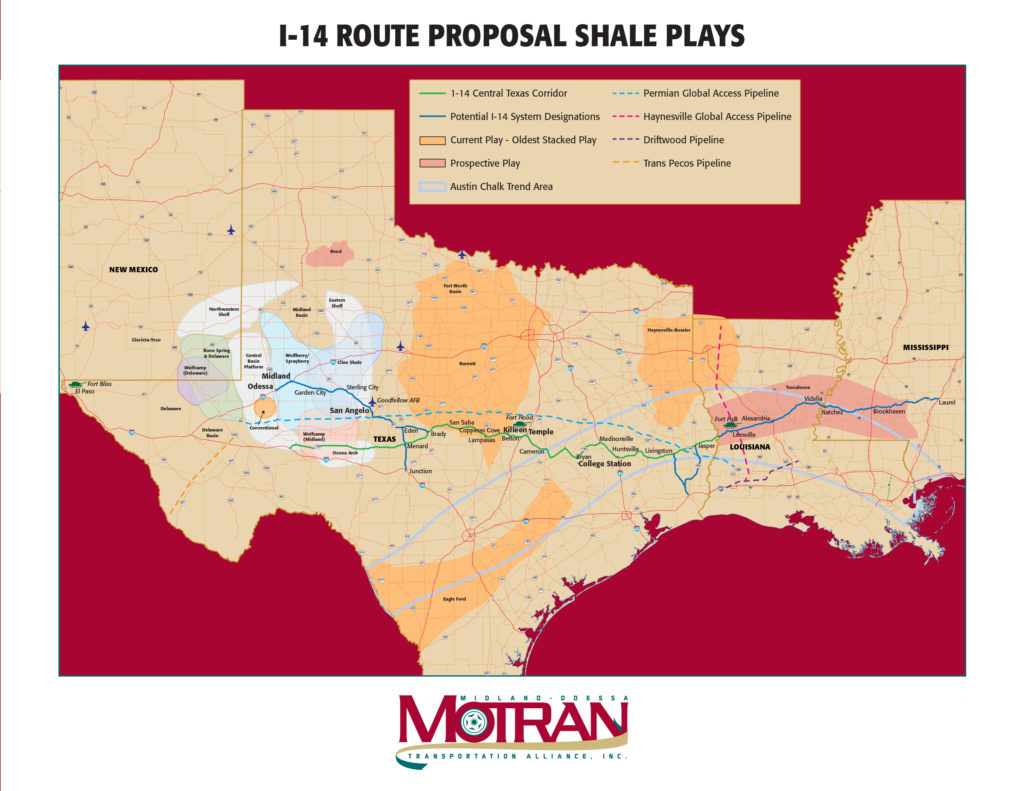